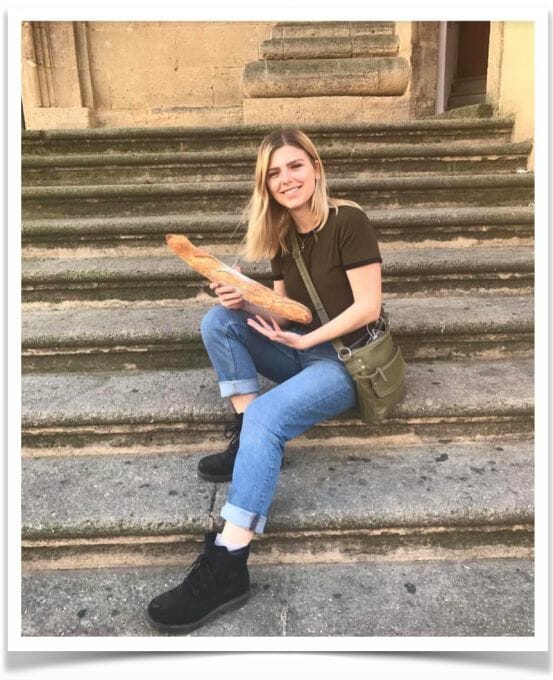 “To be in a country where you don’t speak fluently and you struggle to express yourself [. . . ], it made me so sympathetic, empathetic for people who are in countries where they’re not a native speaker but they’re trying, because I never really knew how difficult it is to represent yourself in a natural way.” — Tiffany Ferguson (@tferg__)

If blending your interests with your major, and having fun while you are doing it sound interesting to you, you should give this one a listen. If you want to graduate and have more than a piece of paper to show for it you should ALSO listen.

She hasn’t graduated yet, but it seems like she has.

I transferred (twice) and so did Tiffany, from California to New Orleans; then studied abroad in France, and finally moved to New York where she’s now happily enrolled at Hunter College. She addresses the moving pains associated with transfers in her interview.

Oh, I almost forgot; she studied abroad in Aix-en-Provence 🇫🇷, which is where her “mandatory baguette” picture above is from. Her interests are in film and media, and mine kind of are too. So we had fun, and that means you will as well.

Are You Thinking About Transferring? [Infographic]

How To Study Abroad Twice as An Undergrad with Dilyn Riesterer
The 9 Biggest Reasons More Students Don’t Study Abroad
ETSU’s John David Discusses Vigo, Spain, Traveling Throughout Europe, and Galician
Study Abroad Influence in Aix-en-Provence With Tiffany Ferguson
Should You Double Major or Study Abroad?
How Dalia Lourenço Parlayed Her 3 Study Abroad Experiences Into A Career That Spans The Globe
How (and why) To Go Abroad After You Graduate With Corinne Kenny
7 Things I Wish I Knew Before I Studied Abroad